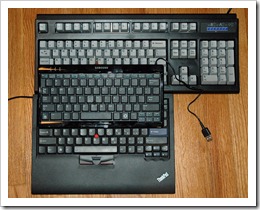 Trackpoint, pointing stick, eraser head mouse, nipple mouse—whatever you call it, if you’re like me and you love it, you don’t want to use a computer without one.

After a chiropractor urged me to stop stooping to look down at my laptop display (which is giving me “military neck,” or a flattening of the curve in the neck), I decided to take my laptop ergonomics more seriously.

First up was raising the laptop display to an appropriate height. I chose the 3M Vertical Notebook Riser (LX550),

as it seemed to get the display to the most appropriate height (most competing products raise the body of the laptop at a much shallower angle and/or don't have full freedom of adjustability). While it’s not the most travel-friendly (Logitech’s Notebook Riser wins that award),

I chose function over form. Besides, a few reams of paper or a shoebox can serve as a laptop stand in a pinch.

The Samsung Q1: The Bad 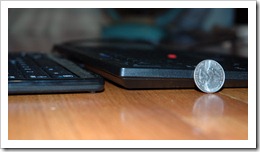 A small and tidy keyboard that even comes with a travel pouch! I was the most excited about this keyboard, and the most disappointed. The keys feel flimsy, the back wasn’t perfectly flat so it wobbled when I typed, and worst of all, the pointing stick just isn’t very good. It has a weird acceleration thing going on, where the center is fairly numb but as you push harder and farther from center, it accelerates non-linearly. Thumbs down for the keyboard, thumbs way down for the mouse.

Other negatives: The WIN key is in the bottom-right, which I can live with. But Home and End require FN modifiers (FN + PgUp = Home), which is a big problem for someone who spends a lot of time in Visual Studio.

The redeeming graces? It’s teeny without feeling teeny. From the left of ‘A’ to the right of ‘;’ it measures 7 1/4”—just 1/4 inch shorter than a regular full-sized keyboard. That and they shave off some more size with narrower Caps Lock, Shift and Enter keys.

If you need an external keyboard occasionally and you need a small & portable model, this keyboard might be for you. But if you’re looking for a full-time keyboard, the Lenovo is still pretty tidy for travel and has a much better feel (plus it’s cheaper). Verdict: not recommended. 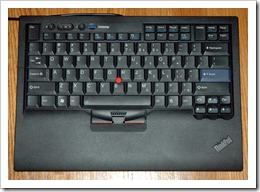 When I unplugged the Samsung and plugged in the Lenovo, I knew I was never going back. The feel of the keys are sturdy. Don’t let the “regular” laptop keyboard look fool you, it’s even better than the keyboard on my Toshiba, as well as my girlfriend’s modern Lenovo laptop. The keys have a buttery softness to them, a firm response, and they’re quiet.

Oh and the pointing stick. It’s perfect. Perfect. Sensitive and responsive, without a dead zone in the center like the Samsung, and it stops on a dime. Perfect.

A lot of reviewers on Amazon have complained that this keyboard suffers from a lag that leads to double-presses or delayed shift-releases. I can say with confidence that the model I got does not suffer from that. I type in the 70 to 90 WPM range, so I’m pretty confident that if the problem existed I’d see it.

If you install the drivers from Lenovo [see footnote 1], you’ll enable the center button+TrackPoint to scroll, plus media keys/volume controls that are very useable.

As for the layout, it’s full-sized (7 1/2” from left of ‘A’ to right of ‘;’), Home and End are actual keys, WIN is in the bottom-left. The only thing is FN is in the far bottom-left corner, where I prefer CTRL, but it’s a minor adjustment that’s well worth it.

Size: it’s slim and sleek. The wrist rest is nice, something I’m used to in a laptop keyboard. It slips into my laptop bag alongside the laptop without any trouble.

Unicomp EnduraPro: The Best to Type On

First a bit of history on Unicomp. They make the only “real” clickety-clackety keyboards, having bought the “buckling spring” patent from IBM/Lexmark some years ago. (Here’s an interesting NPR piece on Unicomp.) Allegedly, buckling spring keyboards are faster than modern “blister” keyboards (referring to the switch underneath the key). These keyboards are supposed to be easier on your hands than modern keyboards, too: when you type on a blister keyboard (including the Lenovo), you don’t get tactile feedback until you push all the way through the key, which is to say, it’s as if you’re hammering away on a hard surface. With a buckling spring, you type until the spring buckles, but not when the movement stops, so it’s gentler. Make sense? And does it live up to the hype?

Without a doubt, it is the best keyboard to type on. The key action is crisp, fast, the keys snap back instantly, and it’s precise. After typing a couple of long-winded emails and much of this review on it, I quickly got over the learning curve of the different “throw” of this type of keyboard over the typical laptop keyboard I’m used to. As promised, the key press registers after about 2mm of pressing, but the bottom of the keywell isn’t for another 1 or 2 mm. Definitely a different and better typing experience than laptop keyboards I’ve grown used to over the past few years.

The pointing stick, however, is another matter. It is on a very long pole, and it’s moderately sensitive. The Lenovo’s pointing stick doesn’t really move, it just senses the pressure you apply to it. The Unicomp’s pointing stick is more like a joystick: you have to wiggle it around and move it in the direction you want. Couple its loose wiggling with a dead zone in the center and only 2 buttons that are hard to click, and it didn’t pass muster. Better than the Samsung, but not in the same league as the Lenovo.

Other notes: top-notch build quality (it weighs nearly 5lbs) and I enjoyed using a full-sized desktop layout, but missed the multimedia keys and volume controls that I quickly found to love in the Lenovo.

Side By Side Typing Speed

I ran through two iterations of this Aesop Fables typing test on each keyboard, in the opposite order the second time, taking the average.

While this isn’t a perfect science experiment, it does show that the Unicomp and the Lenovo are fast, topping out for me at 95 WPM. The low initial Lenovo score came because I was used to typing on the Unicomp and switched back to the short-throw laptop-style keyboard and my fingers just didn’t know what to do!

If this review were about keyboards, I’d give the best and fastest typing experience to the Unicomp. But since this review is about pointing stick keyboards, the award goes to the Lenovo. It is a great keyboard, and has a perfect pointing stick. Overall usability goes to the Lenovo, too: with its media keys, middle mouse button with scrolling, and forward & back buttons, it’s the best to use for everyday computing. Typing on it is very good, too, even though it has a traditional (but sturdy) laptop keypress mechanism. If I lived my life on a Bash or Powershell prompt and rarely reached for the pointing stick, I would keep the Unicomp in a heartbeat. Even though I write a lot of code and emails and would benefit from a great typing experience, I really need a great pointing stick to find my way around a modern OS and development tools like Visual Studio.

Maybe someday a perfect keyboard with the right tactile response and the perfect 3-button pointing stick will come to market. Maybe it will even have a gentle ergonomic curve and bluetooth and still be tidy enough to travel with. Maybe someday.

P.S. This page is full of associate links on Amazon. If you appreciate this review and decide to purchase one of these products from Amazon, please support this site by following the links when you add to your shopping cart.

[1] The drivers install a startup program called skd8855.exe in HKLM\Software\Microsoft\Windows\CurrentVersion\Run that doesn’t seem to do anything. I left ltpPoint because it seems to be responsible for the extra features tab in the Mouse control panel.

This is actually a file permission error. Bring up properties for the folder C:\Users\all users\Microsoft\Crypto\RSA\MachineKeys, Advanced, Auditing tab, add Full Control for Everyone on the local machine for both failures and successes.

Run the configuration wizard again. It will still fail, but now you’ll know which file has the permissions error.

Bring up the Event Viewer, Security log. Compare the timestamp from the log to the failure audit: there’s your file. Correct permissions (probably take ownership and give yourself full control), run the Wizard again, it will succeed (at least for this step).

When you’re done, turn off the file auditing.